GSSF CLOSES OFF 2018 AND USHERS IN CHRISTMAS WITH STEEL CHALLENGE COMPETITION SPONSORED BY ORINDUIK DEVELOPMENT INC.

On the heels of Thanksgiving, the Guyana Sport Shooting Foundation chose last weekend to end their shooting calendar with a Steel Challenge Shooting Match which was sponsored by Orinduik Development Inc.

The Match on November 24, 2018 was well attended by members and invited shooters of the Guyana NRA, competing in three SCSA Divisions: Production, Limited and Wildcat. Wildcat Division saw competitors using .32ACP and any other calibre lesser than a 9mm while those in the Production and Limited Divisions shot 9mm or higher calibre hand guns.

As an affiliate of the Steel Challenge Shooting Association, a sister body of the United States Practical Shooting Association, the GSSF over the years has been organising matches following their strict safety policies. This simple, yet action-packed shooting sport attracts Guyanese pistol shooters from all around the country on a regular basis.

Steel Challenge Shooting is considered to be the fastest practical shooting competition in the world. The Competition proved to be an exciting one consisting of three (3) different stages where competitors shot at 5 individual steel targets per stage. Shooters were scored using an electronic timing device, penalties of added time were applied for any misses after the designated stop plate was shot and the total time taken was the score: all while being closely monitored by the Foundation’s Range Safety Officers. The shooter with the lowest time to hit all the plates overall in the match in the respective divisions were declared the winners.

Beautiful trophies were presented by Lt. Colonel Charles Hutson, Director of Orinduik Development Inc. which is a private Security Firm based on the East Coast that specialises in aviation security and VIP personal protection.

After remarks from Match Director and Stats Officer, Dr. Pravesh Harry, President of the G.S.S.F., Mr. Ryan McKinnon delivered some brief remarks to the participants and spectators as to the vision of GSSF for the new year and plans to move the sport shooting forward. Participants and attendees were then treated to the Guyanese Christmas treat of black cake to close off the shooting calendar and usher in the festive Christmas season.

The GSSF would like to extend its sincerest gratitude to Mr. Brian Backer, Lt. Col. Charles Hutson and the Board of Directors of Orinduik Development Inc for the kind Match sponsorship. The Foundation also wishes to thank the Guyana Defence Force, Chief of Staff Brigadier Patrick West, Commissioner of Police Mr. Leslie James, OC Mr. Guy Nurse, the ranks of TSU and the GPF Armoury and the Guyana Police Force and the Media. Additional thanks are extended to Brigadier Patrick West and the GDF for the use of their range facility at Timehri and to Mr. Colin Changur of Muneshwers Travels and the Management of Clear Waters.

In Photo below: Some of the Participants in the Steel Challenge Match sponsored by Orinduik Development Inc. (Photo Credit: Mr. Stanford Howard) 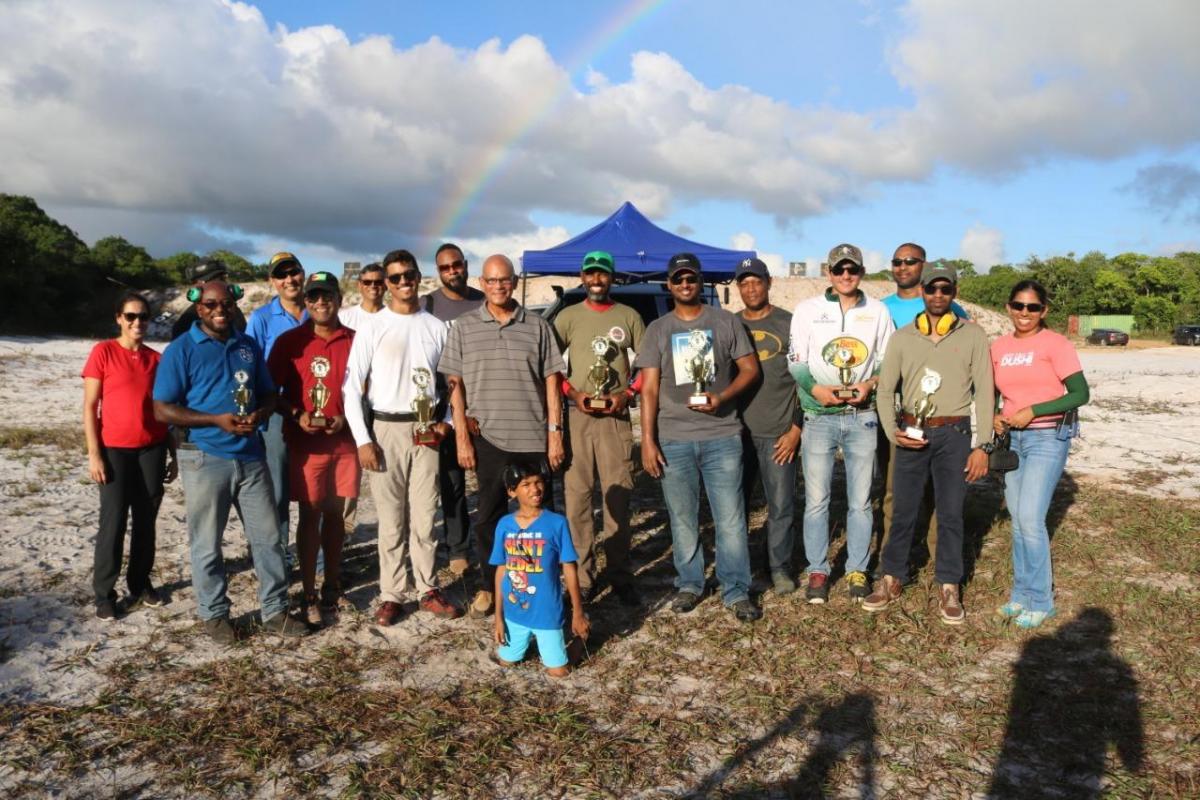