Amidst light scattered showers last Saturday 28th March, 2015, local practical shooters came out and safely balanced the three elements of the practical shooting triangle: Speed, Power and Accuracy at the GDF’s Timehri Ranges when the Guyana Sport Shooting Foundation hosted another Practical Pistol competition which was open to all existing practical shooters of Guyana.

In her Opening Remarks, Match Director and President of the GSSF, Ms. Vidushi Persaud welcomed participants and spectators to the Match. She acknowledged the generosity of corporate Guyana and thanked the management of NABI Construction for their donation of a new roll of construction mesh and also the management of Nutra Farms for donating wood which were used in the construction of several screen for the Foundation’s Practical Shooting section. Ms. Persaud commended the dedication and hard work of members and specifically noted two members who worked tirelessly over the past week to construct the impressive screens: Vish Sookdeo and Ryan McKinnon. She also acknowledged member, Mohamed Qualander and Queensway for the quality Armscor ammunition that was made available, before she declared the match open.

Competitors were all very eager to show off their skills in navigating between the Foundation’s new stage props while safely engaging targets in the three dynamic stages. These stages required the shooter to engage as accurately as possible multiple targets that were setup in various scenarios, while moving to various points and positions and all while striving to do so in the shortest possible time. Points were deducted for any misses and hits on no shoot (penalty) targets.

Above all, the safety element for this match was monitored by three of Guyana’s internationally certified Range Officers: Ryan McKinnon who was appointed Range Master, David Dharry and Michael Blake, who kindly volunteered to oversee the match and it’s adherence to the rules.

The first stage called “Open Season” required the shooters to sit on a chair with their backs touching the back of a chair with a table place some distance away on which was placed the unloaded firearm and all magazines. On start signal, shooters had to race to the table, retrieve their gun, make it ready and then engage 4 paper targets and 1 falling plate.

The second stage “Twist and Shout” consisted of 11 paper targets with 5 No-Shoot targets which were placed in front of and adjacent to the shoot targets, thus making some shooting angles even more difficult as hits on NS targets would attract a minus 10 point penalty per hit. This caused some shooters to slow down their shooting speed to avoid picking up any penalties and some even risking harder shots at greater distances to deflect angles on the no-shoots. The start position saw the competitors starting with a loaded and holstered handgun from a common point downrange. The shooters mobility to move backwards safely was tested as they had to be cognizant of ‘the 180 degree rule’ prior to a sprinting along a corridor set our across the width of the stage to engage the remaining targets. A tricky target was positioned in between two barrels and was only visible at a certain angle. However, none of the shooters seemed to be in such haste that they forgot it, thus avoiding penalties for misses and procedurals for failure to engage.

The third and final stage named “A Good Hair Day” was adjudged the most challenging but fun stage. This stage saw shooters having to engage 12 paper targets and 2 falling plates. The start position was seated at a dressing table full of pink accessories. The start position was holding a pink mirror in one hand and a pink hair brush in the other, whist the unloaded handgun and all magazines were placed on the table. Needless to say, a lot of laughter was heard and many memorable photos were snapped on this stage. On the start signal competitors had to retrieve their firearm then move downrange to be within the fault lines before engaging any targets. Some shot while on the move, thus saving time while others took it slow and steady, giving consideration to ideal shooting positions even when shooting through the two windows. Predictably, everyone followed the pattern of shooting at the second and lower window last which required shooters to either creatively go into the prone position, squat or kneel to engage at least 3 of the 12 targets.

The sport is built around safety and simultaneously measures the ability of the competitor to shoot rapidly and accurately with a full power (9mm/higher caliber) handgun in a fun, fair, and competitive environment. Scoring sees the competitor total points obtained divided by the recorded time taken to engage all targets of the stage this equates to a Hit Factor. The highest HF wins full stage points and the percentage difference in HFs is calculated and points are awarded to the other competitors against this. The shooter with the highest accumulated points from all stages in a match wins overall.

Scoring was tallied by the official scoring software for the sport and done by Stats Officer Dr. Pravesh Harry who efficiently released the results as follows:

Overall match Results are as follows:

At the end of the Match, Range Master, Ryan McKinnon commended the Match Director, Stats Officer, Range Officers and GSSF members for ensuring the efficiency with which the match was run. He specifically noted that safety is always paramount while handling firearms and the high level will always be maintained by match officials and the G.S.S.F. in all events.

In closing, special thanks were extended by the G.S.S.F. President, Ms. Persaud to; the Match Officials, Brigadier Mark Phillips, the Guyana Defence Force, Commissioner of Police Mr. Seelal Persaud, Commander of A-Division, ACP Hickens, the ranks of TSU and the Guyana Police Force, the Media and GSSF members for their support and encouragement towards the Foundation which is dedicated towards encouraging and promoting sport shooting amongst all Guyanese.

More on the G.S.S.F. can be found on our website www.guyanasportshooting.com

(In Photo below competitors and prize winners: Kneeling from left to right Dharry, McKinnon, Beharry) 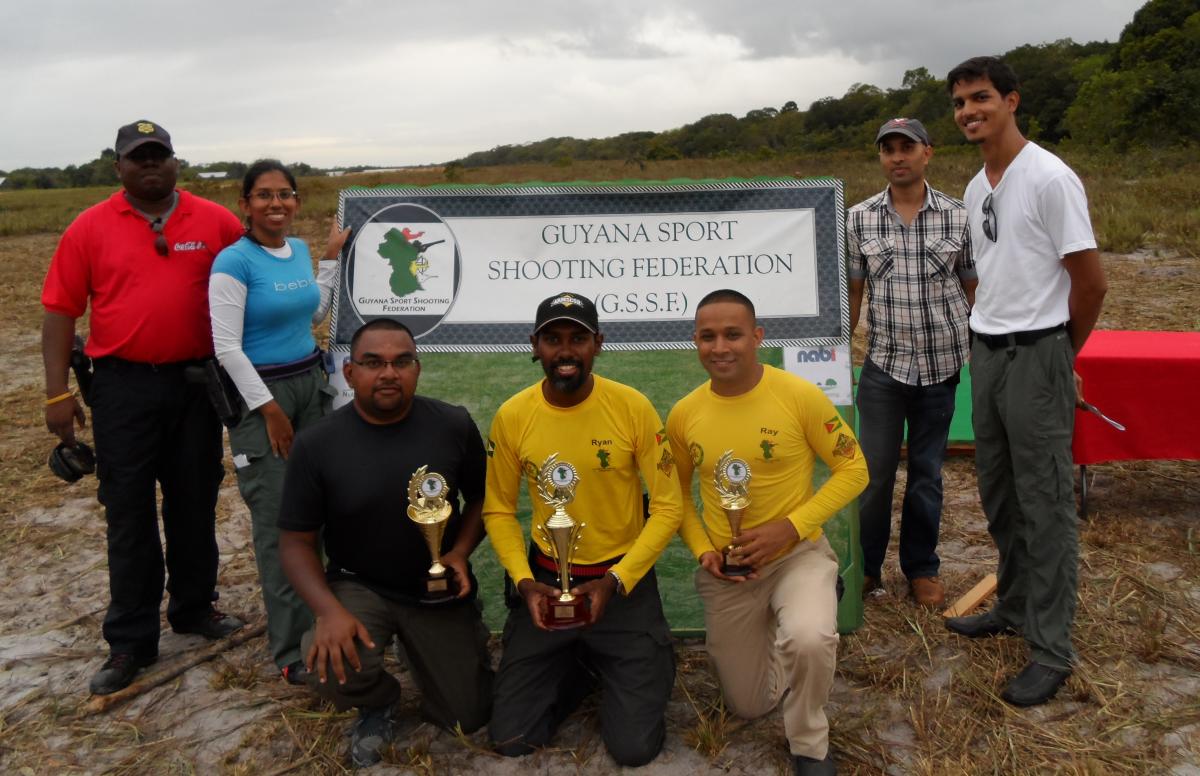 Below: Shawn Smith on the ‘A Good Hair Day’ Stage at GSSF’s Practical Pistol Match 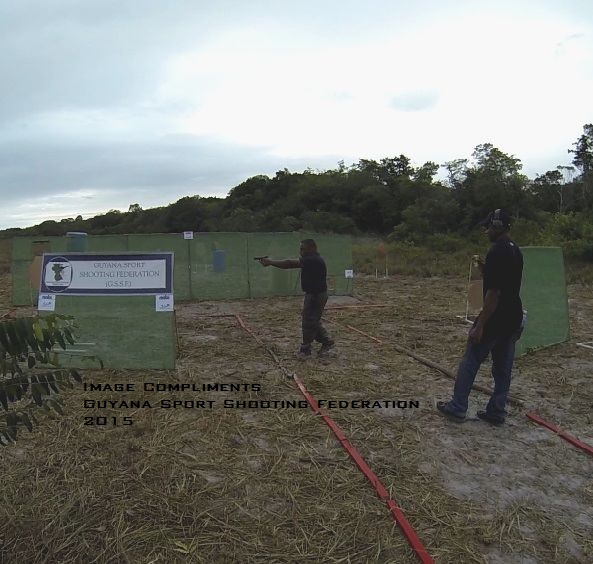 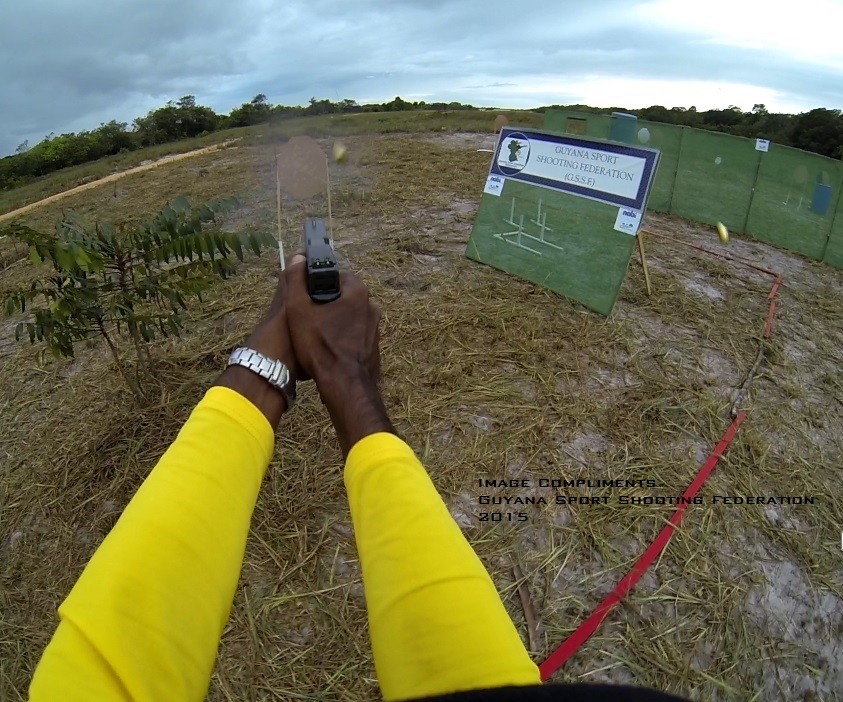 Below: Vidushi Persaud doing a magazine change whilst moving to low window 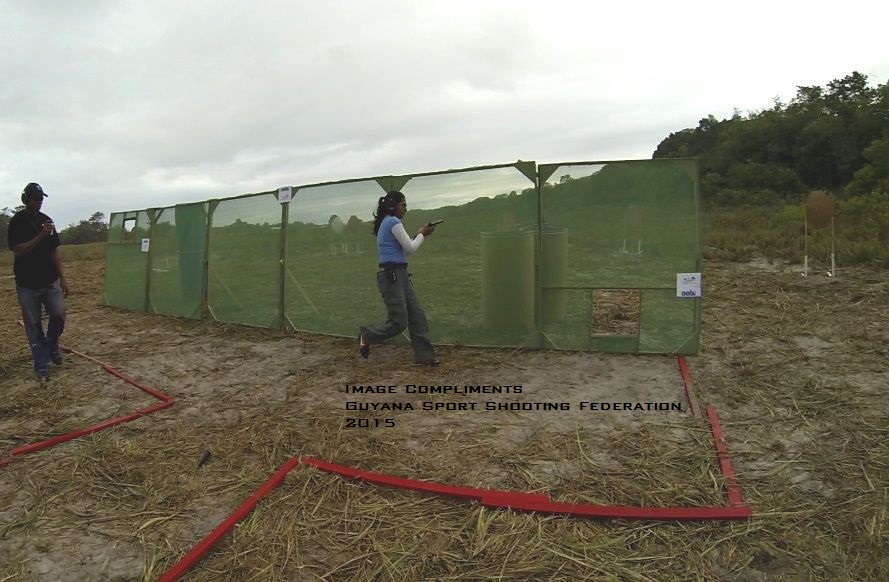