The match was declared open by GSSF’s President Vidushi Persaud and after some brief remarks from Vice President Michael Blake, things got underway.

Following the Latest Edition of Practical Shooting Handgun Rules, the competitors enjoyed an afternoon with wonderful weather under cool but overcast skies while safely engaging targets in three dynamic stages.

The first stage called “Condiments” required the shooter to hold a bowl and a salt-shaker before the start signal is heard after which he/she had to engage 5 targets, while avoiding no-shoot / penalty targets which if hit would attract penalty of -10 points per hit.

The second stage “Gangway” was the longest of the day and adjudged the most fun stage. It consisted of 12 targets and 2 falling plates, some of which were hidden behind screens and behind no-shoot targets. This stage required shooters to engage targets while on the move and reload their guns in an effort to cut their overall time.

The third and final stage aptly named “The Coconut” saw shooters creatively dropping a coconut they were required to hold for the start position. The mobility of competitors was tested since the second shooting position was a short sprint downrange before they can see the other targets positioned behind hardcover screens and more no-shoots.

Practical shooting is a sport that simultaneously measures the ability to shoot rapidly and accurately with a full power handgun (9mm or higher) in a fun, fair, safe and competitive environment. Three elements – speed, accuracy and power – form the three sides of the practical shooting triangle and in order to be successful in any match competitors must balance their abilities in all three elements, safely. Breaching any safety regulations on the range and its surrounding area can see violators being disqualified (DQ) from the entire match.

Scoring was tallied by the official scoring software used for the sport and done by Stats Director Pravesh Harry who efficiently released the overall results as follows:

The Match was open to all established Practical shooters, the Guyana National Rifle Association and the Guyana Police Force were invited.

Secretary of the Guyana Sport Shooting Foundation Steve Ninvalle delivered the Vote of Thanks at the end of the Match, which he specifically noted was conducted and duly completed safely. He expressed thanks to Trophy Stall and Mr. Ramesh Sunich for the support and the donation of the attractive trophies.

Then GSSF also presented copies of “Front Sight” Magazine the official journal of the United States Practical Shooting Association to the top 3 Stage winners for each stage. 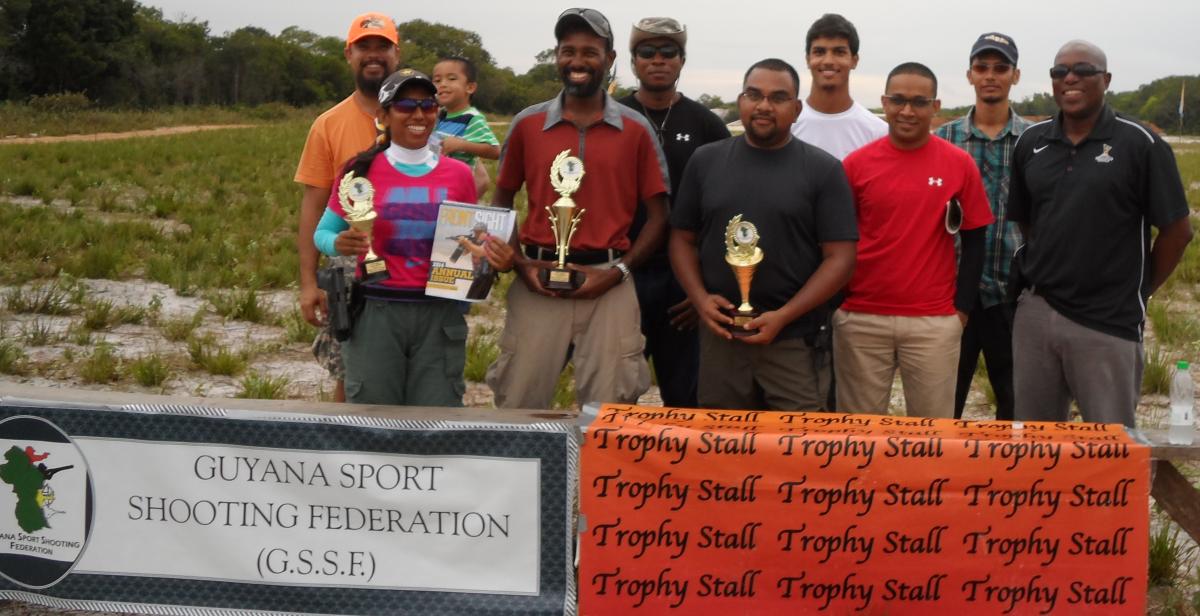