Last Saturday 7th December, 2019, local practical shooters braved the rainy weather and headed to Timehri Rifle Range to participate in what would be Guyana’s last Practical Shooting Match for 2019.

By way of reminder, Practical shooting is regarded as any type of sport shooting that involves engaging targets while having to move with the firearm. Scoring takes into account three elements – speed, accuracy and power. Saturday’s Match which was sponsored by Woodpecker Products located at Lot 40 Fourth Street, Alberttown, Georgetown, did just that with the 5 (five) exciting stages that sought to measure the shooters’ ability in all three elements and coordinated under strict safety guidelines.

The Competition included one Classifier Stage which consisted of 6 paper targets and 3 no-shoots. Competitors were required to stand relaxed in a demarcated box facing downrange with the handgun loaded and holstered. After the audible timer beeped, competitors engaged the targets with one round each from within the shooting box then had to make a mandatory reload before engaging all again with another round each from within the shooting box.

Usually all scoring on practical shooting stages is by comstock scoring. However, the second stage named ‘Raw Deal” was deemed the most interesting stage of the afternoon as the first stage to be hosted in a competition using the Virginia Count scoring method. Virginia Count scoring dictates the specific number of rounds that may be fired during the stage. It differs significantly from Comstock scoring in that each additional round fired in excess of the specified number will result in a Procedural Penalty. This stage even saw seasoned shooters registering so many misses it was commented that it was not only raining cats and dogs but mikes.

Competitors were required to start seated in a chair at a table holding two standard playing cards, one in each hand, being held by the thumb and index finger with the handgun loaded and holstered. Upon the start signal, competitors had to engage either the first 3 targets on the left or the right with only two rounds per target. Then he/she had to perform a mandatory reload and engage the 3 remaining targets with only 2 rounds per target. Competitors had to remain the designated box for sll shots fired but did not have to remain seated.

The Third stage designed by Ryan McKinnon was a long stage that was adjudged the favourite stage of the day which tested competitors fitness as they navigated through a course engaing 13 classic targets and 2 poppers. This stage ‘RM-28” required participants to stand relaxed in Area A which was not within the fault lines. Upon the start signal being given targets had to be engaged from within fault lines.

The Fourth Stage called “Down Low” designed by David Dharry, required shooters to stand with their palms touching identified XX marks on a screen with firearm loaded and holstered. On start signal competitors had to engage targets as they became visible with the mandatory requirement that 3 paper targets and 2 poppers must be engaged from below the screen/simulated wall. Needless to say, there were several variations as to how shooters chose to go down low to complete this stage.

The Fifth Stage “Horsing Around” comprised of 2 Classic targets and 4 poppers. Start position was hands touching barricade, handgun loaded and holstered. On start signal, shooters had to engage all targets. However, the steel poppers could only be shot while holding onto a rope on the ground. The way the rope was positioned, shooters had to go to the ground and hold with one hand.

Scores were computed on the go thanks to the use of electronic scoring methods by way of a special application called Practiscore. Match results were announced as follows:

After the Closing Presentation Ceremony, participants and attendees were then treated to the Guyanese Christmas treat of black cake to close off the shooting calendar and usher in the festive Christmas season.

The GSSF would like to extend its sincerest gratitude to Mrs. Luana Fernandes and the Management and Staff of Woodpecker Products for the kind Match sponsorship and support of the Foundation’s activities and events. The Foundation also wishes to thank the Guyana Defence Force, Chief of Staff Brigadier Patrick West, Commissioner of Police Mr. Leslie James, OC TSU Mr. Guy Nurse, the ranks of TSU and the GPF Armoury and the Guyana Police Force, the Media and GSSF members for their support in promoting practical shooting locally. Thanks also to Ms. Marva Johnson of Ultimate Catering for the Christmas cheer of adorning the festive black-cake pieces. Thanks also to Mr. Harold Hopkinson for the use of his personal props, steel plates, poppers and targets stands for some of the stages. 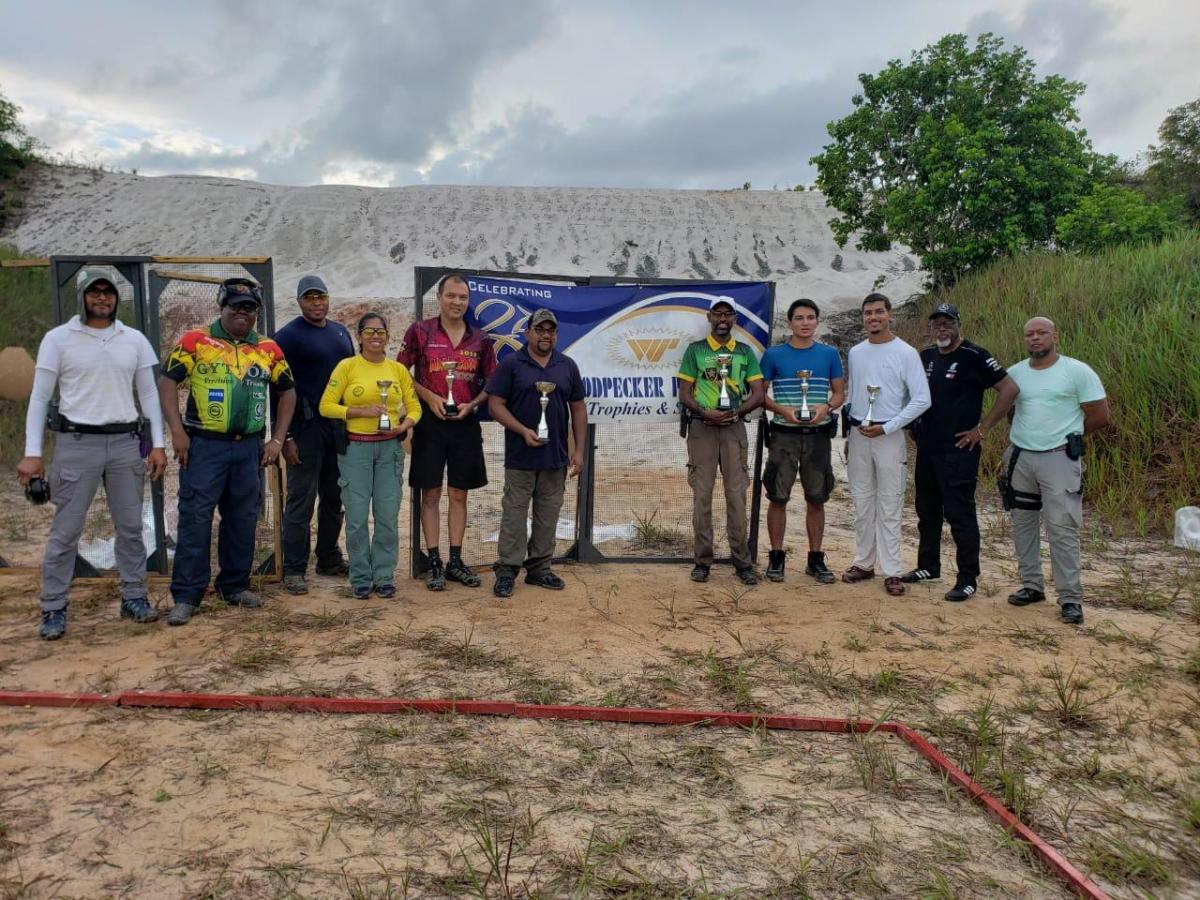 Group Photo of some of the Participants of the 2019 Woodpecker Products sponsored G.S.S.F. Practical Shooting Match: 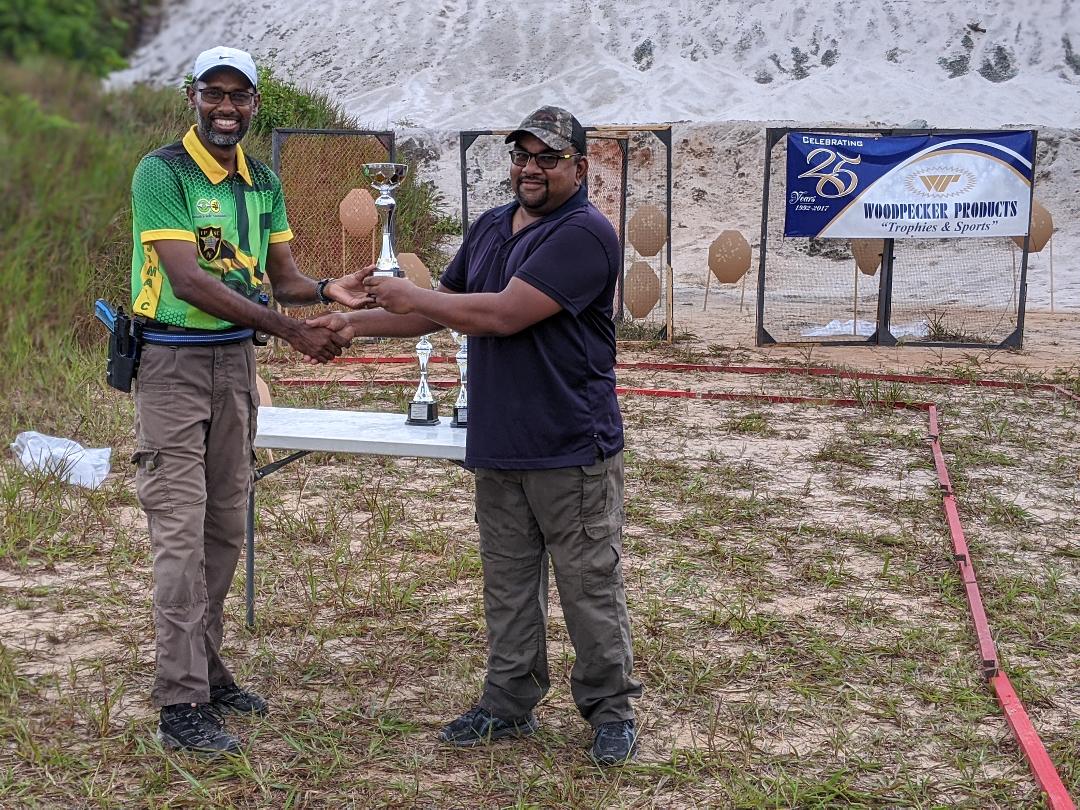 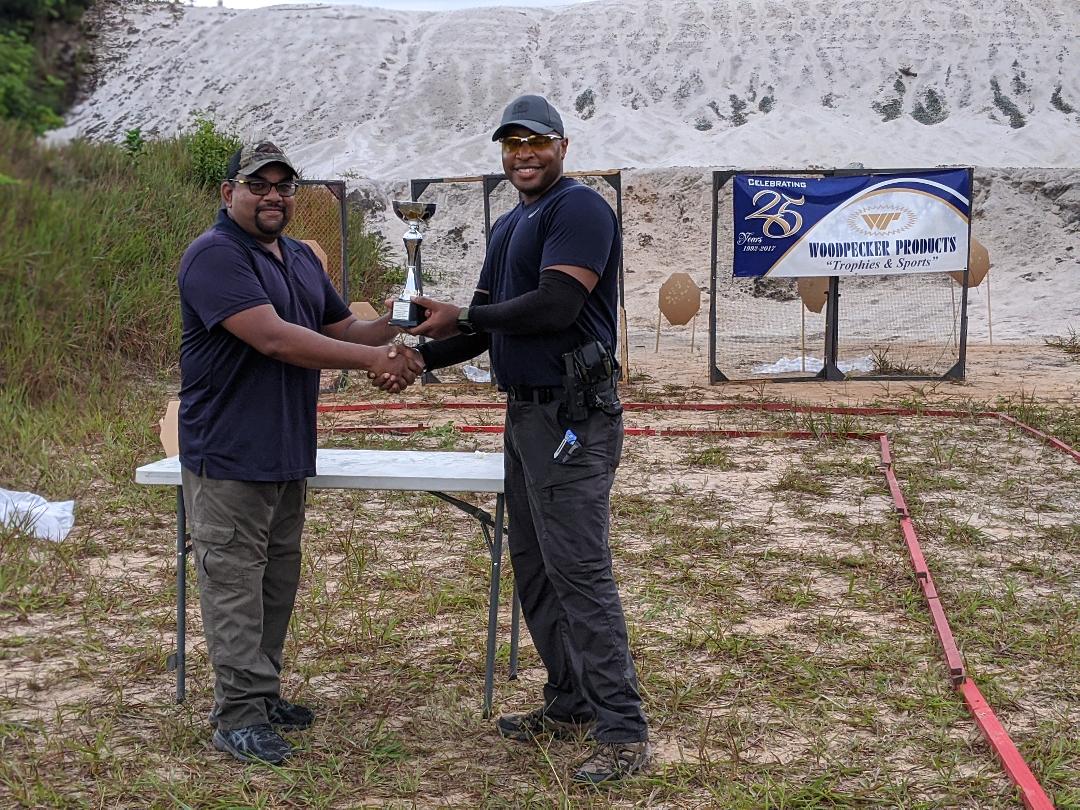