On what some competitors called the hottest day of July 2018, The Guyana Sport Shooting Foundation hosted yet another Multi-Gun Practical Shooting Match at the GDF’s Timehri shooting range. This match was under the sponsorship of the Queensway Group of Companies Inc.

The Match Director, Mr. David Dharry welcomed participants and thanked the Management of the Queensway Group of Companies for their continued support for the sport and more so the Foundation. Mr. Dharry called for a safe and fun match and declared the competition open.

3-Gun gets its name from the fact that competitors use three different types of firearms over the course of the competition: a shotgun, a rifle, and a pistol. You score points by hitting designated targets, which in this Match included cardboard targets and steel targets of varying sizes.

The first stage called “El Prez” required the shooters to start facing up-range with wrists above their shoulders and engage 3 paper targets with only two rounds, perform a reload and again engage each target with only two rounds. This set the momentum for the remainder of the match with some fierce competition mixed with an overall jovial atmosphere.

The second stage called “Rock, Paper, Steel” consisted of 8 paper targets, 6 falling plates and 4 poppers and called for shooters to begin the stage facing downrange with an unloaded and holstered firearm while holding a rock in each hand. This however proved to be little challenging for all as there were (rocks) plates and poppers falling and targets having to be hit accurately.

The third stage dubbed “4 Boxes” saw competitors strategizing on the method of completing the stage while within the confines of the rules.  This consisted of 3 paper targets side by side downrange and 4 shooting boxes as the name suggests, placed at varying distances from the targets. Shooters were instructed to engage each target with a minimum of two rounds from within each box, before performing a mandatory reload before engaging the targets with at least two rounds each from within the next closest box. After the final shot, shooters hoped to achieve at least 8 perfectly placed shots in each target.

The fourth and final stage entitled “3G in GT” was the main multi-gun stage. The stage called for the shooters to engage a host of paper and metal targets from within four different shooting areas, using either a rifle, shotgun or handgun as specified by the stage instructions.  Competitors were first required to begin the stage with their handgun loaded and holstered, chamber empty, while holding the loaded rifle at a 45 degree angle to the ground. On the start signal specified metal targets were to be engaged using the rifle, after which it was to be unloaded and placed safely before retrieving the next firearm, a shotgun and proceeding the to the designated area for engaging the assigned metal targets. Upon completion of this and having safely placed the unloaded shotgun on the designated table, shooters would then draw their handgun and engage all paper targets from within the remaining shooting areas.

While the dust was still settling, the Stats Officer Dr. Pravesh Harry was ready to hand over the final standings to the Match Director. Scoring used the competitor’s total points divided by the time it takes to shoot those points on the targets in each stage which results in a Hit Factor. The shooter with the highest accumulated points from all stages in a match wins overall. Courses of fire in the practical shooting sport are often designed so that the shooter must be inventive. Shooting was under the USPSA Practical Shooting Handbook Rules and immediately uploaded to the scoring software online Practiscore.

Overall match Results are as follows:

The GSSF would like to extend its sincerest gratitude to the Guyana Police Force, Acting Commissioner David Ramnarine, Assistant Commissioner Hicken, the OC TSU Mr. Guy Nurse and the ranks of the GPF Armoury and TSU. Additional thanks are extended to Brigadier Patrick West and the GDF for the use of their range facility at Timehri and to Mr. Harold Hopkinson for the use of his personal props, steel plates, poppers and targets stands for some of the stages. 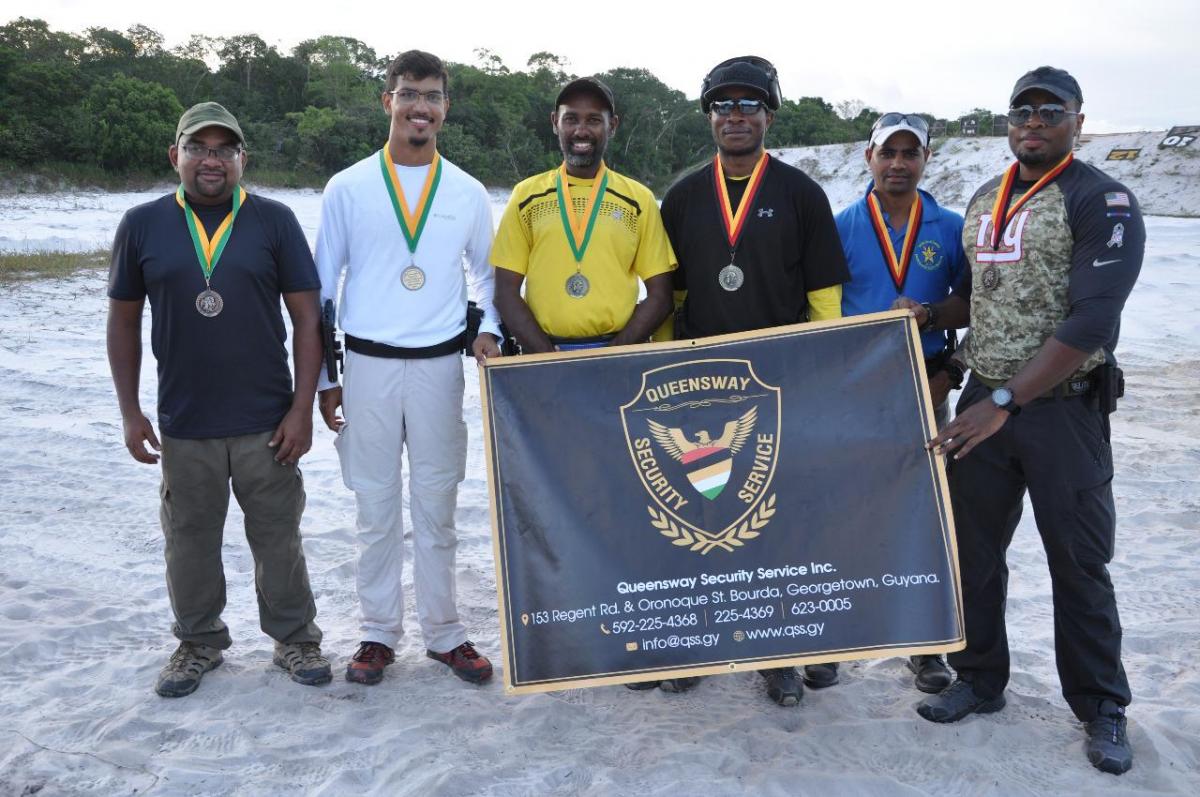 Some of the Participants in the 2018 Queensway 3-Gun Match: